How to become a Vtuber with ‘Virtual Motion Capture’ 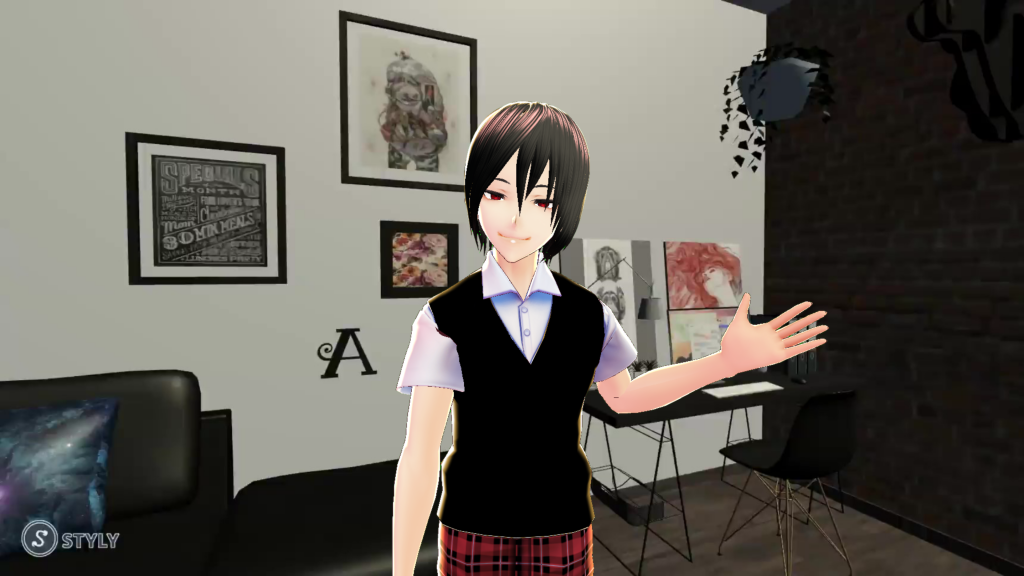 VirtualMotionCapture is the application that handles the 3D model defined by the file format called ‘VRM’, so you need to prepare a 3D model in VRM format.
In addition to the models sold or distributed, you can also use your original VRM model created with the tools such as Vroid, ‘Cecil Henshin Application’.

▼This article explains how to use VRoid▼ 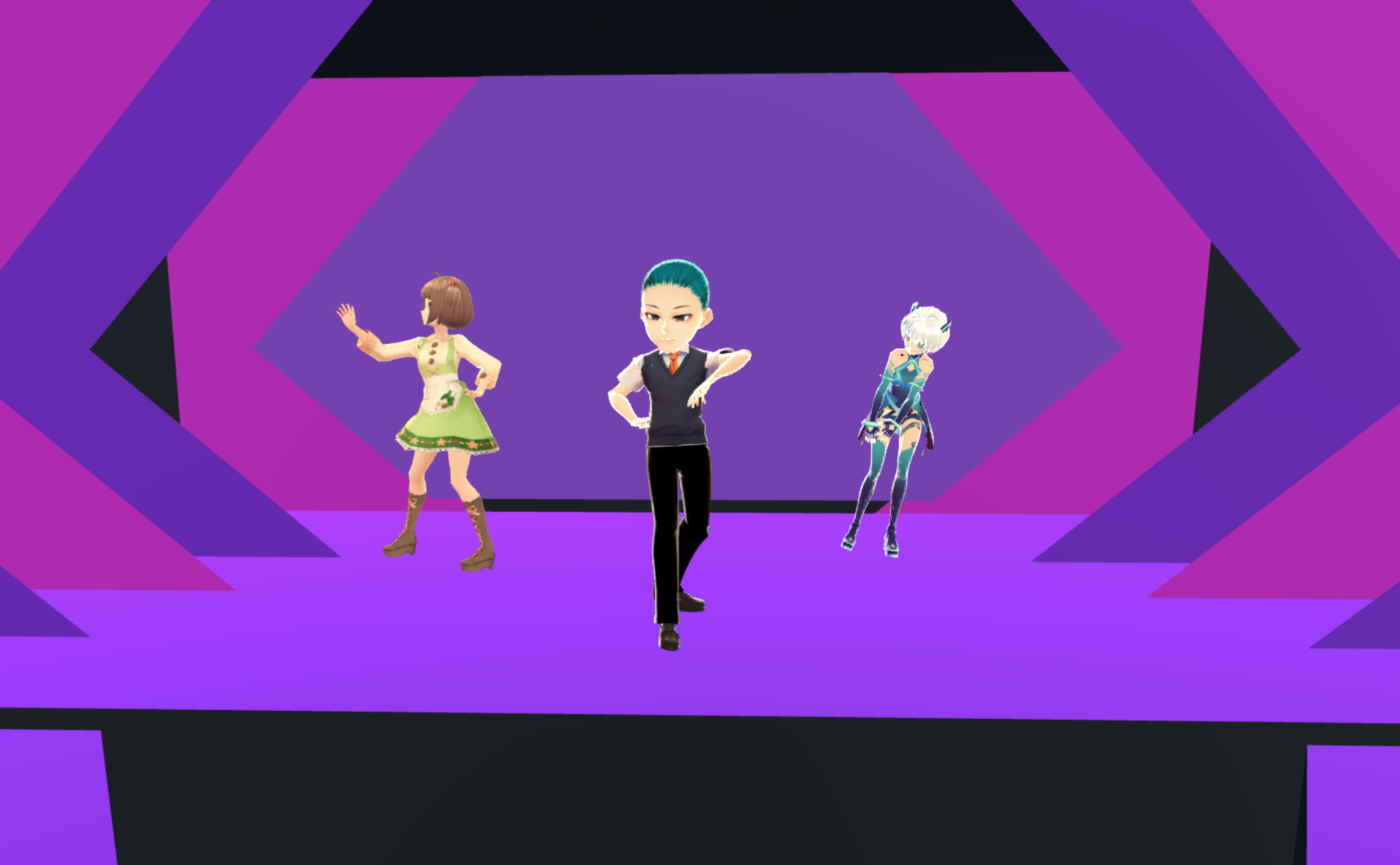 And, we use a live-streaming application called OBS Studio at the final stage, so download this software as well.
However, if you use other live-streaming software, you may use it instead.

The most notable feature of VirtualMotionCapture is that you can launch it simultaneously with the VR-game application, which is considered impossible with other common applications.
By using this feature, you can move a character in sync with the motion of the player who plays the VR game, so you can livestream the VR game like a Vtuber.
In addition, instead of launching it with the VR game, you can simply use it to control a 3D model, which is also an advantage for various applications.

*Note by the translator – VirtualMotionCapture supports English UI. You can select the language by the drop-down box at the bottom of the ‘Settings’ window.

You can download VirtualMotionCapture for free from BOOTH.
And, if you are a paid subscription member, the pre-release version can be downloaded from pixv FUNBOX.
This time, I download the free version (Ver 0.23) from BOOTH.

After launching VirtualMotionCapture, import the VRM model you want to control.
When launching the application, it also brings up the control panel at the same time. 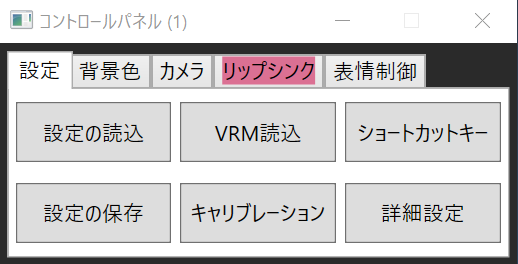 Press the ‘Open VRM’ button on the ‘Settings’ tab to open the ‘file-selection’ window. 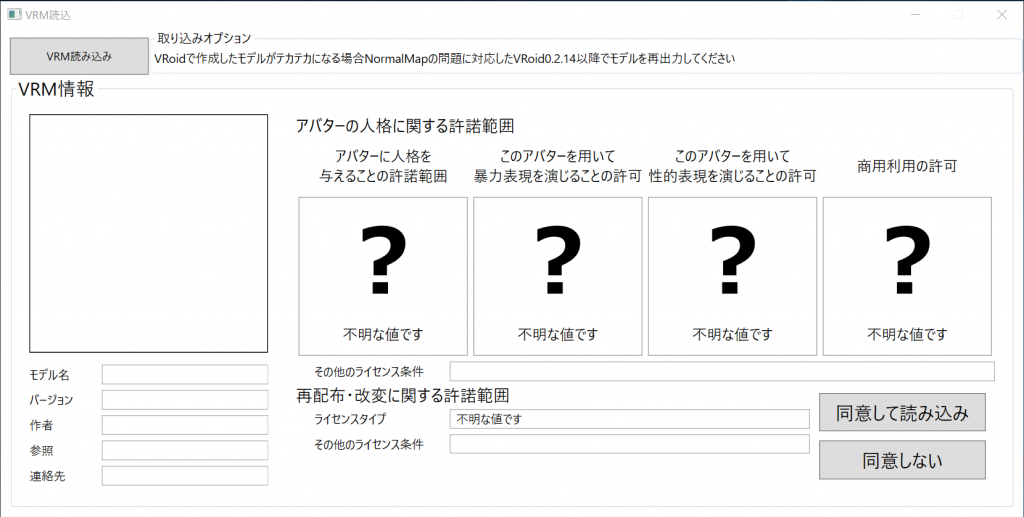 Select the VRM file by pressing the ‘Open VRM’ button

Select and open the VRM file prepared earlier.
It brings up the license information for the avatar, so check it closely before pressing the ‘Agree / Import’ button if you use the purchased model etc. The license information is displayed

In the case you use your original model created with VRoid etc., the avatar information you set is displayed, so just press the ‘Agree / Import’ button.
If everything goes well, the model will be displayed on the screen. The model has been imported

The setting for Camera, Lip Sync and Trackers

The setting for Camera

You can set up the Camera by selecting the ‘Camera’ tab.
Press ‘Front’ as we want to use the Front Camera.
Click the main screen and then use the mouse to adjust the position of the Camera. 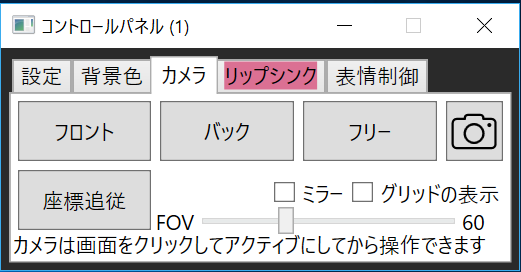 The setting for the Camera

The setting for Lip Sync

By setting up ‘Lip Sync’, you can animate the lip of the avatar in sync with the voice input by the microphone.
If you have not specified the microphone for Lip Sync, the ‘Lip Sync’ tab is shown in red, so you can easily see whether it’s set up or not. 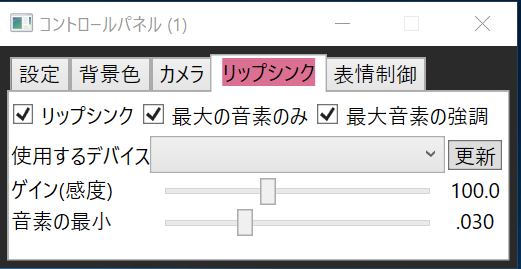 The ‘Lip Sync’ tab – The microphone has not been specified. 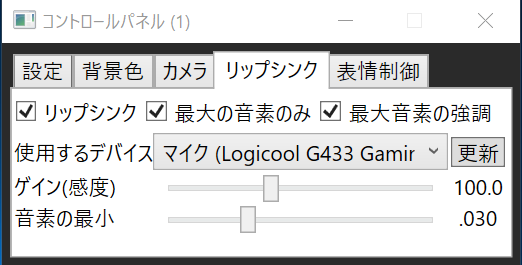 The ‘Lip Sync’ tab – The microphone has been specified

If you don’t use Lip Sync, you don’t need to set it up.

The setting for Trackers 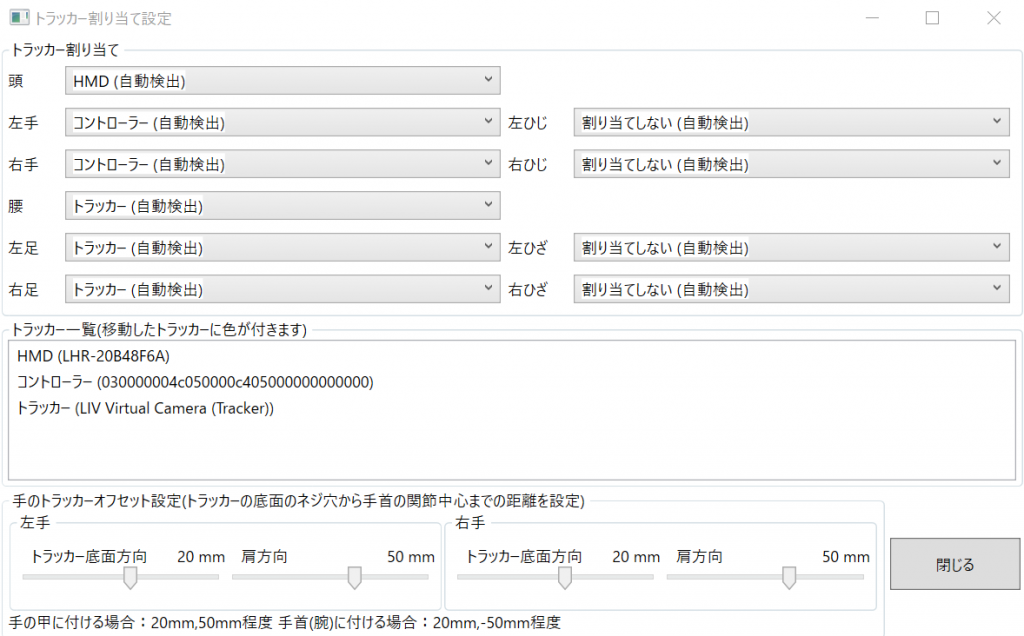 After finishing the settings, let’s move the model straight away.
Press the ‘Calibration’ button on the ‘Settings’ tab.

The settings for Calibration 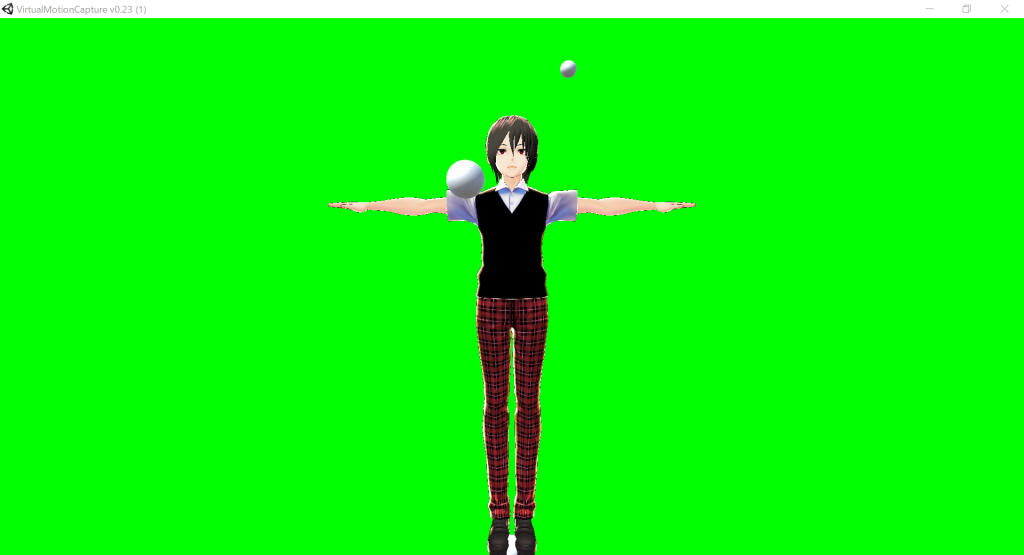 The spheres represent the positions of the HMD and the controllers

You can control the model if the calibration is successful. 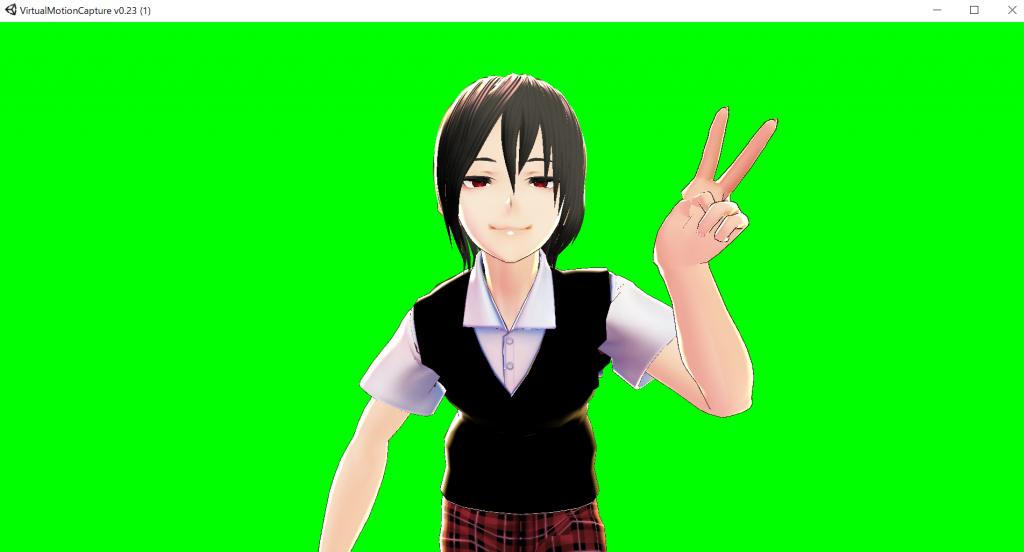 The calibration is successful

How to become Vtuber with STYLY’s space

Now you came to be able to move the model.
Next, create the live-streaming screen for Vtuber by using the space created with STYLY as the background.

The setting for background colour 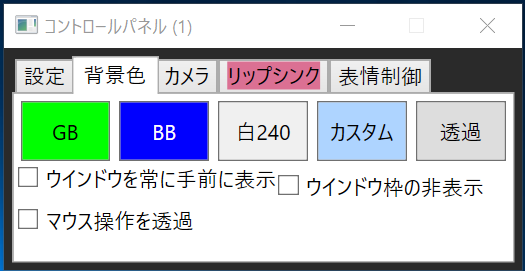 Prepare a space with STYLY

Create your favourite space with STYLY Editor.
Since we use the space as the background, you may create a dummy space by modelling only what the camera can see.
As you can record the video of the space with the Camera function in STYLY Editor, you can also make the background with motions.
This time, we use what is shown in the screenshot below. 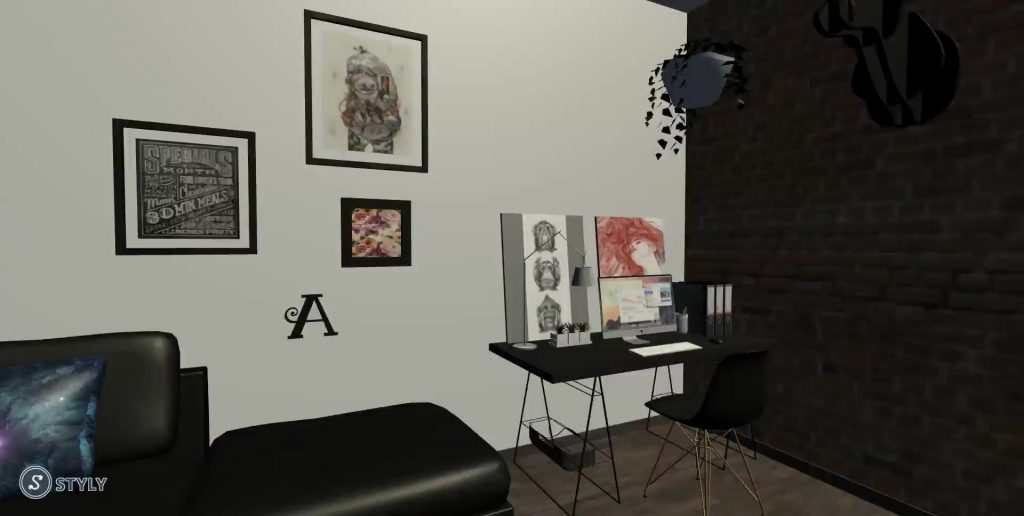 Finally, we overlay the character on the screenshot of the scene created with STYLY Editor.
We use the live-streaming software called OBS Studio this time. Launch VirtualMotionCapture before launching OBS Studio.
Firstly, we add the image to ‘Sources’.
Press the ‘+’ button below the ‘Sources’ box. Click ‘Image’ from the menu and select ‘Create new’. 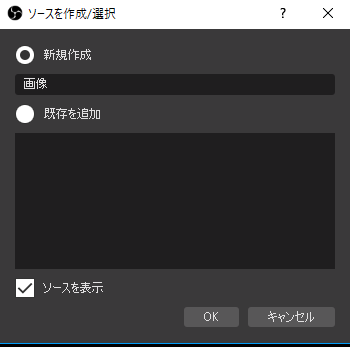 Then, you can add the background image to ‘Sources’ by selecting the image you want to use in the ‘Properties’ window. 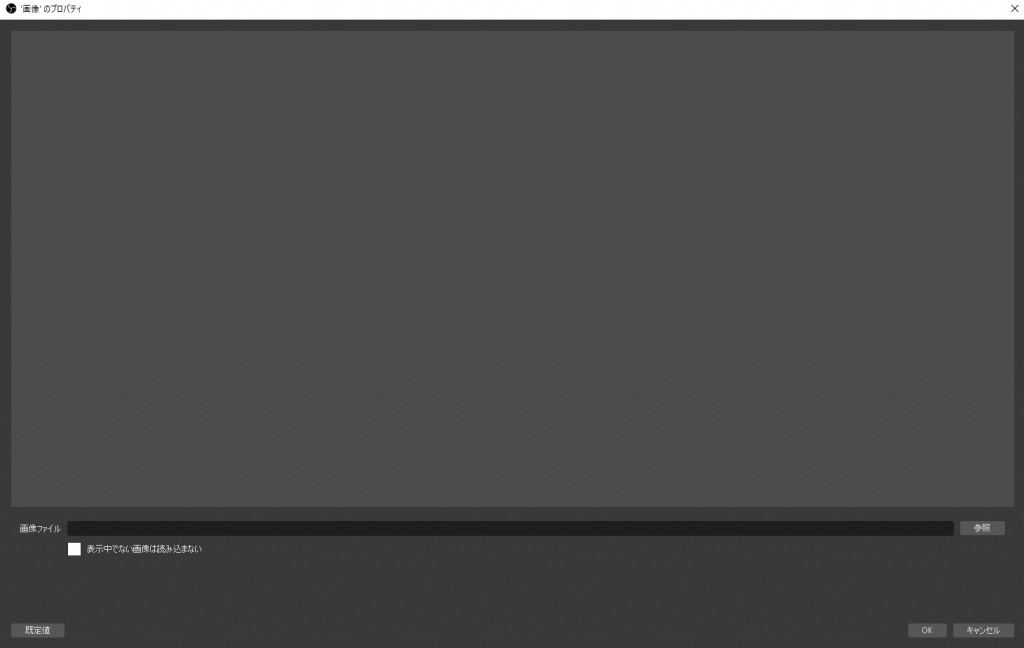 Now the image has been added

Next, add the window of VirtualMotionCapture to ‘Sources’.
As we did earlier, press the ‘+’ button below the ‘Sources’ box to display the menu.
In this time, Click ‘Window Capture’ from the menu and select ‘Create new’. 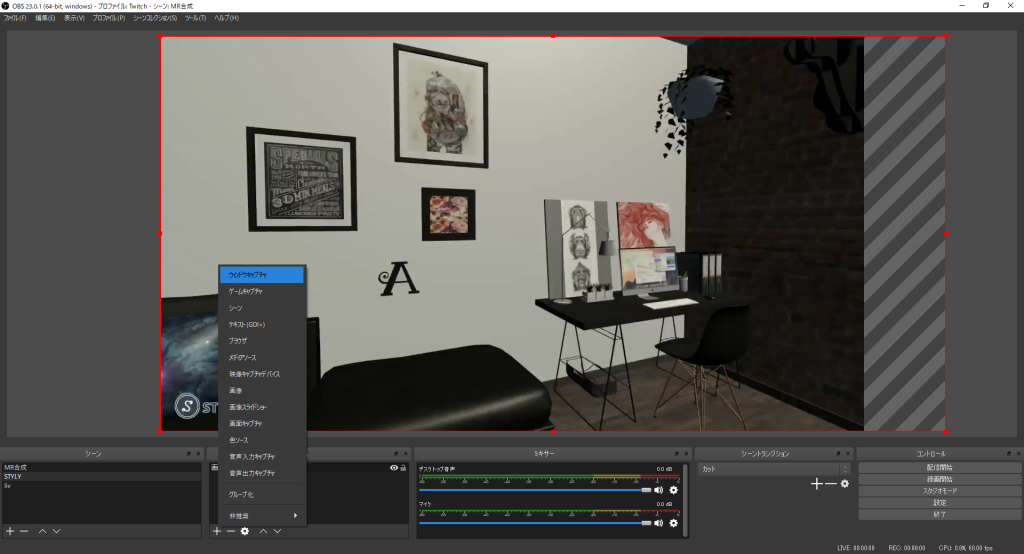 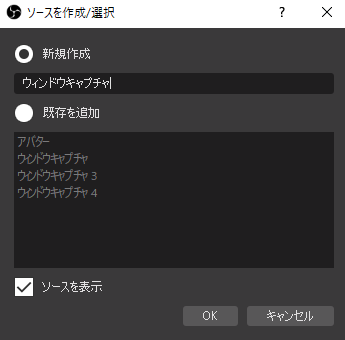 Select the window of VirtualMotionCapture

As a Source listed above another Source will be on the top of another Source in the display, reorder the Sources so that the Window Capture is above the Image.
In this state, only the screen of VirtualMotionCapture is visible and you cannot see the background image at all, so we apply ‘Chroma key’ to the VirtualMotionCapture window to show the background. 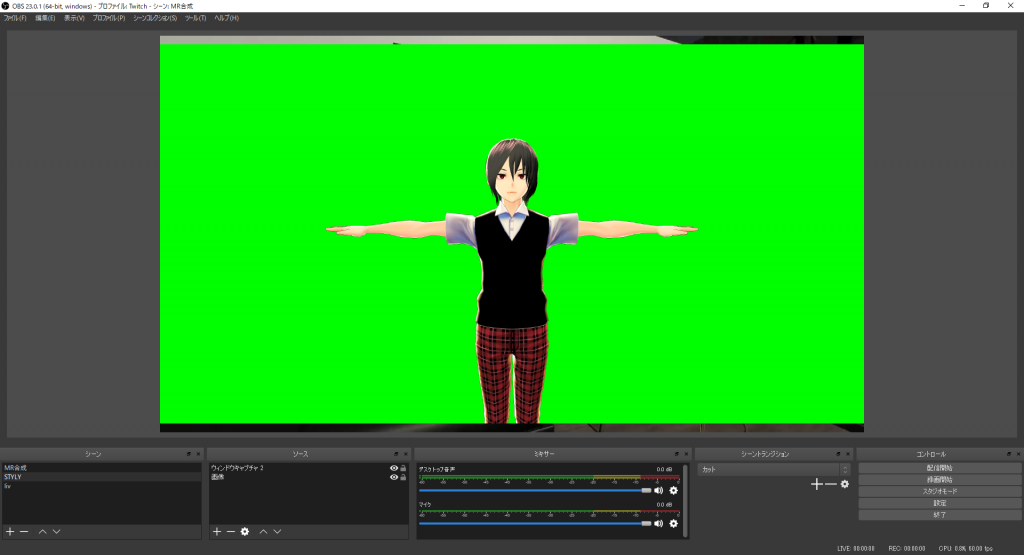 How it looks – before applying ‘Chroma Key’ 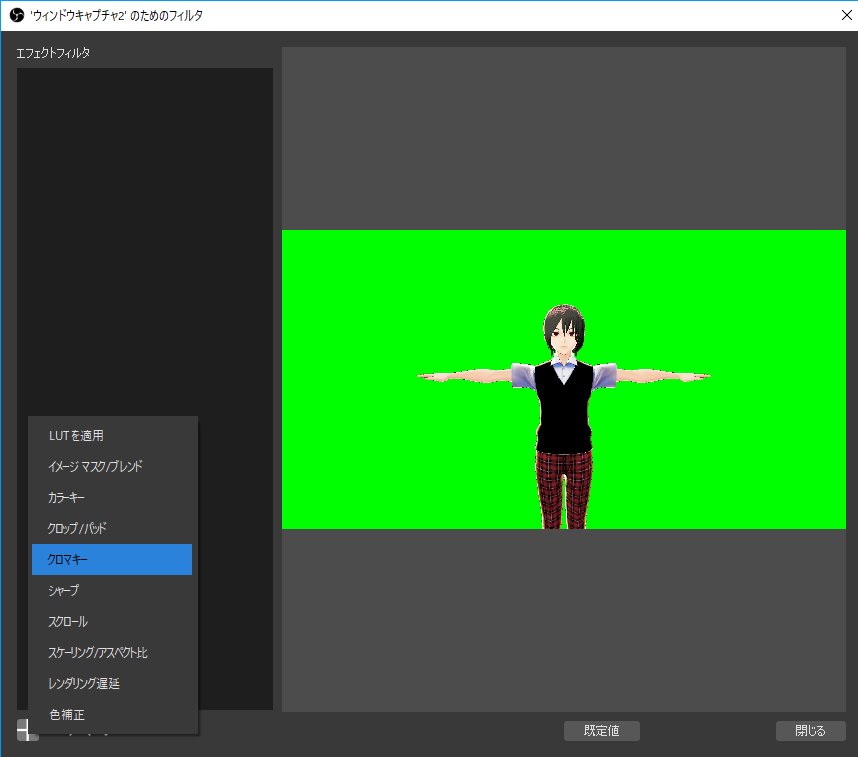 How it looks after applying ‘Chroma Key’

It’s completed now. Once you set up the recording and the broadcasting, you will be able to create a video and livestream. Congratulations!
In this article, I introduced the basics to use VirtualMotionCapture.
Even this basic way allows you to livestream gameplay like Vtuber straight away.
However, you still need to learn more if you want to create an MR video as if the character entered the world of the game application.
Next, I will introduce the application required to record an MR video and advanced way to use VirtualMotionCapture.

Based on the VR/AR production and distribution platform STYLY, you will learn the basics of Unity and PlayMaker necessary for creating VR/AR content, as well as the process of creating the compelling content being distributed on STYLY (we’ll expose you to the production techniques).

This time, in addition to VR, AR/MR works will also be accepted. We are seeking further designs of ultra experiences.

VTuber Maker is the #1 free, simplistic, and 3D Tool for VTuber Content Production, just with a webcam.

The VTuber Maker Tool, powered by Live3D, has let more and more people create, share and have fun!

** Important Note
We support the import of VRM avatar, which needs to be implemented through the VTuber Editor
At the same time, we also support model customization：https://live3d.io/vtuber_pricing#pricing

Our team is a passionate startup team that loves visual storytelling for vtuber.
Our mission is to build VTuber softwares that enable people to easily create virtual live shows and videos.

Thanks for your support!

And welcome to join the VTuber steam family to give us more opinions.

Description
VUP is a VTuber tool. With just a webcam and a motion capture equipment, you can make your model synchronize your expressions and actions

When is participating in our products you must all times to behave and to abide by our rules:
1.Do not use illegal account；
2.Do not steal others’ models;
3.Do not publish offending resources；
4.Public use of other people’s resources requires consent；